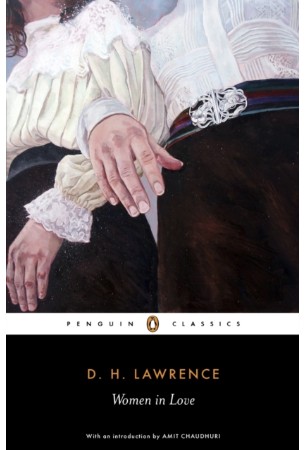 Widely regarded as D. H. Lawrence’s greatest novel, Women in Love is both a lucid account of English society before the First World War, and a brilliant evocation of the inexorable power of human desire.

This Penguin Classics edition includes a new introduction by Amit Chaudhuri. Women in Love continues where The Rainbow left off, with the third generation of Brangwens: Ursula Brangwen, now a teacher at Beldover, a mining town in the Midlands, and her sister Gudrun, who has returned from art school in London. The focus of the novel is primarily on their relationships, Ursula’s with Rupert Birkin, a school inspector, and Gudrun’s with industrialist Gerald Crich, and later with a sculptor, Loerke.

Quintessentially modernist, Women is Love is one of Lawrence’s most extraordinary, innovative and unsettling works. In his introduction Amit Chaudhuri discusses Lawrence’s style and imagery. This introduction also includes a chronology of Lawrence’s life and work, further reading, notes and appendices containing the original foreword to Women in Love, a fragment of ‘The Sisters’, ‘Prologue’ and ‘Wedding’ chapters from an earlier draft, a map and discussion of the setting and people involved.

D.H. Lawrence (1885-1930), English novelist, storywriter, critic, poet and painter, one of the greatest figures in 20th-century English literature. Lawrence published Sons and Lovers in 1913, but The Rainbow, completed in 1915, was declared obscene and banned two months after first publication; and for three years he could not find a publisher for Women in Love, which he completed in 1917.

His last novel, Lady Chatterley’s Lover, was published in 1928, but banned in England and America. If you enjoyed Women in Love, you might like Virginia Woolf’s Night and Day, also available in Penguin Classics. ‘His genius was for instant perception and vivid, passionate expression’The Times’His masterpiece …